We’ve all watched the docudramas and YouTube videos – The suspect is speeding away believing he can out-run or out-smart the police, the officers in chase call for the deployment of the spike strips, and soon the tires are flat and forward motion has stopped or greatly degraded. How is the spike strip relevant to the business world?

As spike strips are to tires, complacency it to an organization: it deflates innovation, stifles creativity and impedes or stops the organization’s forward movement, what we call Transformation. This can occur at all levels in the organization or, in its most damaging form, it can afflict the organization as a whole. We’ve seen the impact of organization-wide complacency: Motorola’s comfort level with analog and refusal to embrace digital; Nokia snubbing the touch screen on mobile devices; Circuit City, Sears, K-Mart, the list goes on and on. These corporations were once leaders in their industries!

My family can tell you that I consider myself one of the great armchair innovators. Among the many things I believe I invented before they were actually invented is the Keurig coffee dispenser, Netflix (streaming AND original content), and the Amazing Race. The problem I always told myself was that I never had access to the resources required to put my ideas into the market. So when I secured a position managing innovation at a global mega-company, I was excited. Here, I would finally have the opportunity to launch my great ideas, become massively famous, and change the world. Boy, did I have a lot to learn.

What soon became clear was that managing innovation for a mega-organization is not about creating great ideas. Of course we had our chance to develop some ideas, but mostly our role was to capture the ideas of leadership, cut through the noise, politics, and disruptions, and push them forward.

The author uses Mozart in the Jungle to explain the study in the evolution of the leaders from the previous conductor dealing with a new reality to the new conductor trying to reach his potential as well as the potential of the organization they are leading. Looking at what it takes to be a leader in today’s exponentially changing environment, leaders must also look at the evolution of leadership. The author covers a brief history of organizational development and the evolution of leadership theory, and how it relates to being a conductor of a symphony. The author uses studies about command and control environments and how they affect productivity short-term and long-term. Ultimately, leaders account for at least 70% of the variance in employee engagement scores. The author highlights their personal stories of working with two different leaders and analyzes who would be a better fit for business in today’s complex world.

Purpose Driven Strategy has become a prime topic of management in the last decade due in no small part to the popular books like Start with Why by Simon Sinek; Firms of Endearment by Raj Sisodia; Leading with Purpose by Mark Koehler; Purpose: The Starting Point of Great Companies, by Nikos Mourkogiannis; and the Progress Principle by Teresa M. Amabile & Steven J. Kramer. Executive seminars are held about it, business models are built on it, and consulting companies have established whole practice lines dedicated to it. This concept of Purpose Driven Strategy is a fundamental change to the approach expressed by Milton Friedman when he said: “There is one and only one social responsibility of business-to use its resources and engage in activities designed to increase its profits so long as it stays within the rules of the game.” In a sense, it is a new type of Humanism where organizations don’t just work for their shareholders but for the betterment of all the stakeholders and the community at large. David Lee, Executive Director of the MSS Business Transformation Institute, explains how businesses are leading with purpose rather than profits and are becoming highly successful. This article shows businesses how to lead with purpose.

“In preparing for battle, I have always found that plans are useless but planning is indispensable.” – Dwight D. Eisenhower

When you start a new business, it is like climbing a mountain. You have a goal in mind and generally understand what you need to achieve. Develop the idea, raise the money, and launch the business. Things remain fairly simple during the first years as well. Grow the business, add the people, build the client base and reach a breakeven point. Whew! It’s not easy, in fact it is one of the most difficult things to do successfully, but the challenge is simple to understand. 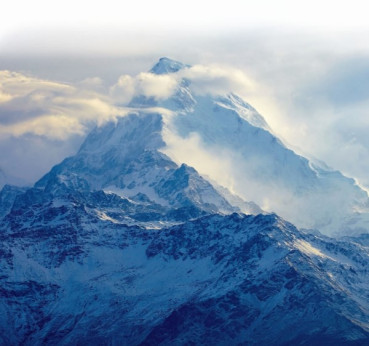 As your business grows and you look at the next set of opportunities, the situation changes. The landscape is no longer a single point to reach but a range of hills, and you are looking for the one that gives you the best view. Suddenly, there are many options with associated challenges and choosing between them becomes complicated. So, you do your analysis, you create a strategy to reach your optimum point, and you execute it. This requires a different set of talents and a different approach. You value analytics, organization, and project management. The meetings get longer and you discuss decisions more, but you feel good because you have made rational choices.

Then your world starts to get more complex and diversified. The landscape changes again. To this point, you relied on rational thinking and analysis. All you had to pay attention to was perhaps a few competitors and partnerships, and your market was fairly stable. Now you have many products across multiple markets and numerous partners and when you make a decision your competitors are countering. Forces you have no control over and seem far away are having major impacts on your business while opportunities you may never have considered are coming your way. Meanwhile, there may also be disruptors you cannot see or predict creating new types of competition. Perhaps they are using a new technology or are in another part of the world.

In this universe, by the time your team can develop a strategic plan and communicate it, the environment has changed and the assumptions you made are no longer true. Rather than resembling a mountain range, your landscape is more like a sea with moving crests of waves, incoming tides and nothing to anchor to. Rather than climbing, you have to tread water and swim constantly.  There seems to be an infinite number of potential futures, and you cannot see far enough to make choices. This is what some call a dancing landscape (a term I first heard from Professor Scott E. Page at the University of Michigan), and it makes developing and executing a strategic plan seem almost impossible because the future is not just unknown, it is unknowable.

The reason strategic planning is so difficult is that the way we think of it has become obsolete. The idea of the five year plan for which we have a staged implementation simply does not work for a complex organization. In most cases, three years is enough for the landscape to have changed entirely and in many industries a plan that is twelve months old is ancient history.

Consider a company that had an international expansion plan in 2012. Inevitably, this plan would have been anchored by one or all of the markets of Brazil, Russia, China or India. By 2013, Brazil and India were both suspect. In 2014, Russia collapsed due to oil prices and sanctions, and in 2015, China no longer looked like a strong bet. Oh, and by the way, here in 2016, Forbes is running articles promoting India as the growth market again while Russia and China are further in the tank.

Does this mean that strategic planning is useless for a complex organization? No, it is just the opposite.

Strategic planning is more essential, but leadership has to consider it differently using a Complexity Lens. 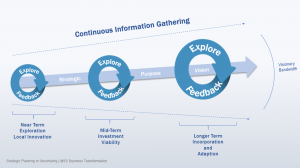 First, leadership creates alignment by defining the organization’s purpose. Next, leadership establishes a different concept of the planning time horizon. In the midst of complexity, it is helpful to think of strategy as a process of continuous review among a growing bandwidth for visionary change. This is very similar to the three horizon approach to strategy with some key differences. What is considered near term, mid-term and longer term is reduced significantly. The idea that strategic thinking occurs on 1 year, 3 year, or even 5 year horizons is collapsed to much shorter 3 month, 6 month, and 12 months (or perhaps shorter) with maybe a 2 year view in the misty distance.

The objective of leadership now becomes creating an organization that is capable of continuous change, where opportunities are examined as a matter of course, where communication and feedback are constant, and where diversity is encouraged. The organization seeks to create a balance between exploration and exploitation of found opportunities. This means trying many things, seeing how they work and incorporating those that show the most promise.

This approach expands the opportunity to create change throughout the organization and to the external environment including customers, partners, and even potential competitors. No longer is change a centralized, top-down process, but it is enabled at the local levels which have been seeded with leaders who possess adaptive behaviors and where interconnectedness is stimulated.

The size of the exploration efforts becomes relatively smaller. Rather than taking on one major new initiative that takes years to implement, the organization explores many simultaneous efforts. Feedback is received and those changes that are most viable locally are given the investment and resources to advance to a larger scale. In the medium term, changes are further explored still with the idea that some will fail. Those that succeed are advanced further across the organization.

The concept of retrievability becomes pervasive to the point that failure is seen to be as valuable as validation because it closes open questions. Only a few localized changes may finally result from this process, but they infiltrate the organization and accumulate as change is now everywhere, not just centrally driven. By the time the longer term horizon is reached, these cumulative changes are fully incorporated, and within a few cycles the organization can adapt to the point of reinvention.

Consider this then. On this horizon, change is happening everywhere, all the time, and interconnectedness enables it to permeate the organization all on a time line of 12 months or less. The concept of Strategic Planning changes in complexity from developing long term, stable objectives to enabling adaptation toward a purpose, interconnectedness, and emergent behaviors. Leadership keeps the organization aligned to the purpose and nurtures the building blocks of adaptation enabling sustainability and allowing the organization to float across the dancing landscape.

The legal system is often considered to be the most complex and convoluted system to deal with. Upfront fees and costly hourly rates for lawyers can make it difficult to come up with the money to pay for the services. Many people do not understand their rights as citizens and as a result, do not know they could receive a reduced fine, have a ticket dismissed, or not be required to appear in court, and without paying substantial legal fees in the process. In a world that continually seeks free or discounted services, artificial intelligence may provide the answer.